What is a good software architecture?

Too many publications answer to this question by introducing some set of practices or principles considered to be best or at least good. The quality of the architecture is then measured by the number of best practices it adheres.

Such a definition might work well for student assignments or in some academia or other non-business settings.

In software business, everything you ever spend time or efforts on, must be reasonably well related with earning money, or at least with an expectation to earn or save money.

Like everything in the nature, good things don’t appear without an equivalent amount of bad things. If some particular software architecture has a set of advantages helping it to meet requirements, it has to have also a set of drawbacks. In an ideal world, software architect is communicating with business so that the drawbacks are clearly understood and strategically accepted. Note that any architecture has its disadvantages. The higher art and magic of successful software development is to choose the disadvantages nobody cares about, or at least can live with.

And here is the thing. Implemented software is something very hard to change, and so its architecture. Thus, the set of advantages and disadvantages remains relatively stable. But the external business situation or even company’s strategy might change, and change abruptly. Features of the architecture that were advantages before, might become obstacles. Drawbacks that were irrelevant before, might become show stoppers.

The software architecture quality might change from being good to being bad, in just one moment of time, and without any bit of actual software being changed!

Here are two examples of how different software architectures can be. This is for an abstract web site that has some public pages, some protected area for logged-in users, some data saved for users, a CMS for editorial content and some analytics and reporting module.

On the server side, there is a database, a middleware generating HTML, and a web server.

When a HTTP request comes, it gets routed to a separate piece of middleware responsible for it. This piece uses an authentication layer (if needed) to determine the user, the session layer to retrieve the current session from a cookie, persistence layer to get some data from the database (if needed), and then renders the HTML response back to the user.

Because of these tight dependencies, the whole middleware runs as a single process so that all layers can be immediately and directly used.

If AJAX requests are made, it is handled in the same way on the server side, except that JSON is rendered instead of HTML. If the user is has to input some data, a form tag is used in HTML, which leads to a post to the server, which is handled by the server-side framework “action” layer, extracting the required action and the form variables. The middleware logic writes then the data into the database.

CMS writes editorial data in the database, where it can be found by middleware and used for HTML rendering.

A SQL database is used, and tables are defined with all proper foreign constraints so that data consistency is always ensured. Because everything is stored in the same database, analytics and reporting can be done directly on production database, by performing corresponding SQL statements. 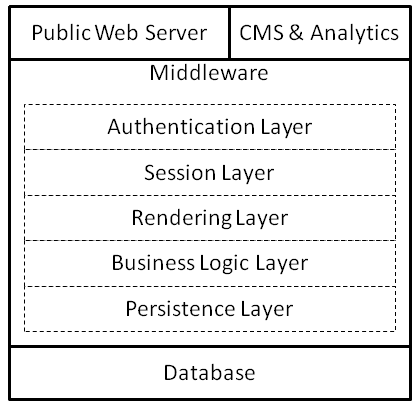 Web server is configured to deliver static HTML files. When such a static page is loaded, it uses AJAX to retrieve dynamic parts of the user interface. CMS generates them in form of static html files or eg. mustache templates.

The data for the user interface is also retrieved with AJAX: frontend speaks with web services implemented on the server side, which always respond with pure data (JSON).

There are different web services, each constituting a separate area of API:

Yes, I’ve just said that. Every web service is a fully separate app with its own database.

In fact, they may even be developed using different programming languages, and use SQL or NoSQL databases as needed. Or they can be just 3rd-party code, bought or used freely for open-source components.

If a web service needs data it doesn’t own, which should be per design a rare situation, it communicates with other web services using either a public or a private web API. Besides, a memcached network can be employed, storing the session of currently logged in users that can be used by all web services. If needed, a separate queue such as RabbitMQ can be used for communication between the web services.