Just like most of us, I believe that we all should take care about the nature and are responsible for protecting the environment so that it remains livable. But I won’t vote for the green party in the next elections. The reason for that is their explicit despise against the science. And I believe, if anything, science is the way to achieve better environment, better society and better politics.

Unfortunately, many Germans don’t really think so, and the premature shut-down of nuclear power plants is the best testimony to that. It is natural to have fear against deadly things you can’t see or smell, but making economic decisions only based on this fear is something different.

But I digress. Actually, I wanted to rant about the so-called energy-saving light bulbs. If you open any mass-media publication about them, even including such normally authoritative sources like “Stiftung Warentest”, you will see a simple saving calculation: normal light bulbs take X watt, energy-saving ones need only Y watt, given H hours per year you have light on, you gonna save (X-Y)*H of watt*hours energy.

Now this is piece of crap. One of the fundamental laws of physics (some scientists believe it is the fundamental law) states that energy doesn’t disappear or be created, but is just transformed from one state to another. Most of the time, it is transformed to heat. When you have a normal light bulb and feed it with 60 watt, 3 watt of this energy will be transformed to light, and 57 watt will be transformed to heat. When you replace it with an energy-saving option consuming 6 watt, 3 watt will go to light, and 3 watt to heat. This means, you will lose 54 watt of heating in your living room. In Summer it is fine, but yet again, days in Summer are long, and lighting duration is short. And in Winter, you will have to compensate the missing 54 watt with your normal room heating. So, in reality, you haven’t saved these 54 watt of energy, you’ve just moved the heating source from your ceiling to your walls.

Now, even if you use electric heaters, a watt*hour of energy is normally cheaper than the lighting energy. Using gas or oil or other sources are normally even more cheaper. So, by switching to energy-saving light bulbs you do in fact save, but to calculate your actual savings, you have to take the difference between how much a watt*hour of normal electric energy costs and how much a watt*hour of your heating energy costs, and only then multiply it with the 54 watts from the previous example. As a result, you will normally get values around 10% of those calculated by “experts” and mass-media magazines. Another important consequence is, of course, that you don’t only save that much money, but you also don’t save that much energy, and therefore do not do that much for the environment. 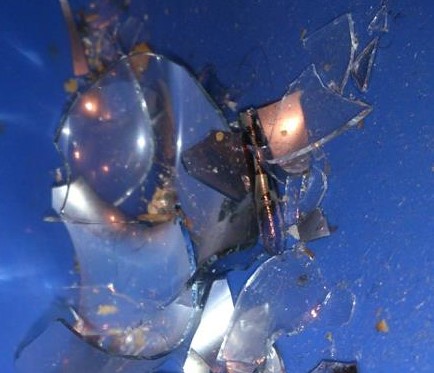 So, saving money and energy wasn’t the reason why I have replaced all light bulbs in my apartment with LEDs. The actual reason was the comfort and safety. Most of my light bulbs were halogen ones, and for some reason, every month or so, one of them would break, and you have to replace it, and go buy replacement bulbs — this is not how it should be! Light should just work. I wanted to install it once and never care about it again.

Another reason was the case of explosion depicted on the right. I don’t want to stay in the rain of sharp glass and heated metal parts.

To give you an overview, here is a full list of all light bulbs in my apartment (one month ago):

As you can conclude, I like it when it is bright. When you turned on all light, it had consumed 870 watt. And this is also the reason why I haven’t switched to energy-saving bulbs. They are not so bright, especially when just turned on, and they normally have must larger physical dimensions, while I only have very small lamps (as you can conclude from heavy usage of E15 and GU10 sockets). Nevertheless, I’ve tested one energy-saving lamp in the bathroom, and I wasn’t fully satisfied with the results.

Now, replacing all that to LEDs is a challenge. My primary goal was achieving the same bright light. I’ve spent some time and money finding an optimal solution, and have finally found a, still not perfect, but an acceptable one, so I want to share my finding.

The first and primary gotcha when going LED is not taking their spot angle into account. I don’t know why is it not such an issue with normal and halogen bulbs, perhaps it is normalized there by law, but with LED, it is wildly different. The spot angle is, as you might think, the angle of light going out of the bulb. To give you some values: 360° means it will light up all around, just like a normal non-halogen light bulb. A value of 220° still looks like a un-directed bulb, while 120° already looks like a bigger spot, for example halogen E14. A value around 38° means the smallest spot typically to be used for table or reading lamps – this corresponds to a GU10 halogen spot bulb. 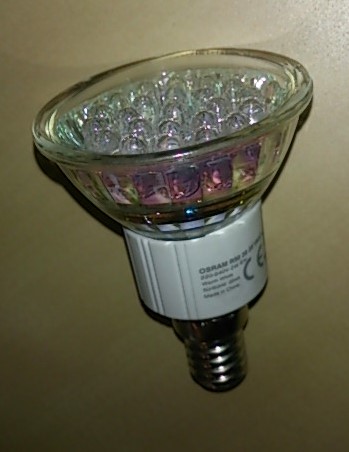 Values below 38° are just shit. Don’t buy these, at all. See the OSRAM example on the right: according to adverts it looked like an equivalent of a 30 watt halogen E14 spot, but this equivalence is only achieved in a very small angle of 25°, so, basically, you will have a dish-sized bright spot on your wall in a dark living room. If you don’t see the value of spot angle on the package or the bulb itself, don’t buy it is either, no matter what they say to how much watt it is equivalent to.

And the last thing to know is very simple – to get a feeling of how bright the LED is, divide its light flux (Lichtstrom, measured in lm) by 10, and you’ll get the watts of a normal or halogen light bulb. Sometimes, manufacturers would put another value, measured in cd. This value is called light intensity (Lichtstärke), and it combines both the spot angle and the light flux. Because you still need to know the spot angle separately, you can ignore this value. If the manufacturer only gives you the light intensity, but not the other two values, just don’t buy this LED, perhaps they want to hide their small angle.

All in all this means the following: switching to LED is not just a simple action, it is a project. You will most probably buy some LEDs, look how they work for you, learn something (eg. what color temperature you like, what angles you need where, what maximal physical dimensions your lamps support, etc), then send them back and get another one. Consulting a competent electronics dealer nearby might be a good idea. I’ve used another one: just order the things in the Internet, and use the 14-day return right.

And here is my solution. I’ve decided to use the LEDs made by Bioledex. First, they were the very first bulbs that looked as bright as the normal bulbs (before, I didn’t even fully believed that a LED can be so bright). Second, it is a German company situated in Augsburg and making (at least part) of their LEDs in Germany. Theoretically, I still can assume that OSRAM, Philips or Toshiba can also manufacture LEDs this bright, I’ve never seen such bright LEDs before. For some reason, Saturn, MediaMarkt, Hornbach and real do prefer to offer only some shitty LEDs from the other mentioned manufacturers, so dark barely suitable to play the role of tea lights.

Bioledex LEDs can be ordered at a number of internet shops, you’ll get the whole list of them on the web site of this company. I particularly prefer spar-helferchen, because of low prices and because when paying with PayPal, they typically give up your package to DHL next business day (I’ve ordered on January 1st, and the package was on the road early in the morning on January 2nd). Full disclosure: I’m not affiliated with them in any kind, besides of two packs of gummy bears I’ve found in my parcels. 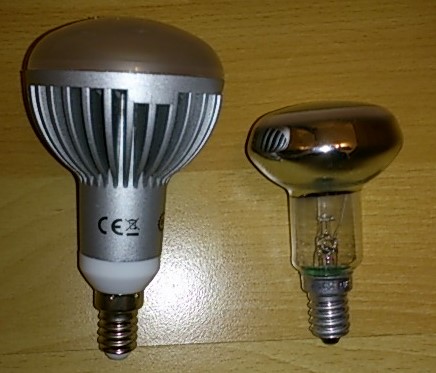 My E14 50 watt halogen spots I’ve replaced with Bioledex RUBI LED Spot. It takes 7 watt, costs around 17 euro and gives 410 lm with 120° and 2900K. As you can see, it is also much bigger than the halogen spot, therefore it looks pretty weird out most of my lamps. Had I waited for another 3 to 5 years, I’d perhaps be able to buy a LED in the same size as the old bulb, but I was too tired to wait any longer. 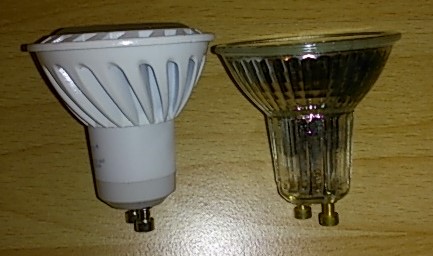 The GU10 50 watt spots, I’ve simply replaced with PERO LED Spot, they take 4.5 watt, cost around 11 euro, and give 250lm with 38° and 3000K. The difference beween 2900K and 3000K is not perceivable to me. As you can see, they are only half as bright than the original 50 watt spots, but I’ve compensated it by placing them closer to the table. Alternatively, Bioledex also has much more brighter LEDs with GU10, but they are also much larger and would look very weird in my lamps.

The E27 light bulbs have created the most confusion. I’ve first thought that having the largest socket available, their corresponding holders and lamps are also big enough and can hold just any bulb. So I’ve first ordered the huge and very bright Bioledex LIMA Bulbs, which take 17 watt, give whopping 1200lm and 240° with 2900K. This is the best and biggest socket bulb by Bioledex, and it costs 38 euro. On the picture, it is the left-most LED. Unfortunately, they were too big, and instead of buying new lamps, I’ve additionally ordered smaller Bioledex BEON Bulb, which take 8 watt, cost 18 euro, and give 600lm with 270° and 3000K. They are shown on the right. In the middle, my previous E27 bulbs for comparison. 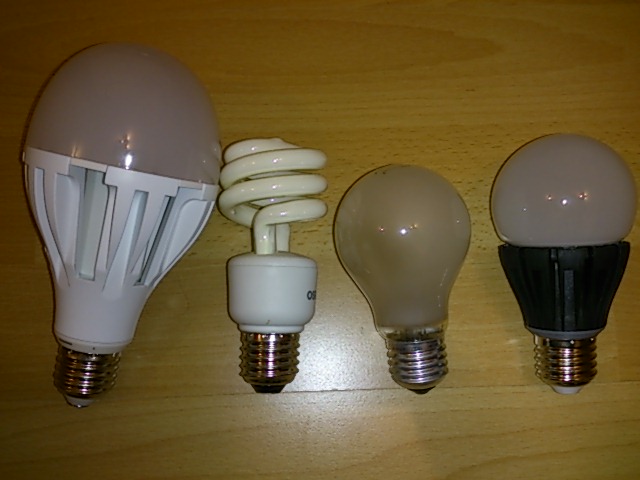 There is yet another interesting fact to consider: the turn-on behavior of these LEDs is different. RUBI and PERO turn on instantly, just like you expect for LEDs. LIMA shows some flicker similar to daylight lamps, but much shorter. BEON takes half a second to turn on! And when you turn BEON off, it doesn’t go instantly off, but dims slowly for a second. Well, perhaps I’ll replace the BEONs with something else: NUMO and NIDI also look promising.

And finally, the price. Yeah. (just to remind you, I’ve just spent 700 euro on some new iPad and Apple TV, just to buy AirPlay support.) So, the price of the LED comfort is: 308 euro plus shipping costs. Included in the price is one spare LED of each used type, to be used as hot-swap. Actually I’ve spent 50% more on this, because of trying out various other LEDs. But I’m not going to return the huge LIMA Bulbs, because their 120 watt equivalent of light is really impressive. Perhaps I’ll present them to some friend who has big enough E27 lamps :)

Now, if I turn on all the light, it will consume 111 watt and not 870 watt as before. But actually, I don’t really care :) And now, I’m wondering, when exactly the first LED is gonna break. Well, hopefully not next month :) 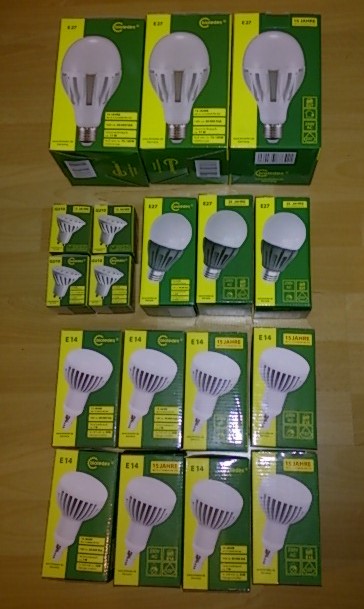