They have desaturated IDE chrome UI so that it is mostly monochrome now (i.e. no colors in the toolbar buttons), with occasional splashes of Metro-nesque deep blue colors, and I find it the most successful Visual Studio UI redesign ever.

First, it is stylish. Second, it channels the focus on the colored source code.

Unfortunately, they seemingly haven’t changed a thing in how the source code is colored, which is pity. Source code colorizer developers seem generally to believe being solving the classic computer science problem of “how many colors do you need to paint a map” and use arbitrary well distinguishable colors. The UX aspect of colorized text is ignored. As a result, one can try to enjoy the source code mostly consisting of bold red text with some lighting blue islands in there.

Another thing I liked was a slight improvement of TFS usability for those who use Scrum. The previous TFS UI, known as Team Exporer, was looking like just some random enterprisey piece of shit. Visual Studio never gave it enough screen estate to look reasonable so that you were forced to scroll and to change the window sizes constantly and a lot of times, even I you just wanted to accomplish a very simple task. Besides, it was unbelievable overcrowded with various text boxes and drop downs, most of them being never used in any company of any size and with any process whatsoever, except of perhaps some teams inside of Microsoft.

So, now, in Visual Studio 2011, they have liberated the TFS UI and put it into a browser. Entering a new sprint item takes typing its text and hitting Enter – exactly the same amount of interaction the best tools in this area support (I mean FoxBugs). Adding tasks to the sprint item is more complicated than it has to be and is not polished enough. For example, I’ve found it funny how the presenter was himself not aware of a usability issue, routinely skipping with a quick double-tab the iteration drop-box when entering a new task (0:36:49 in the video).

In general, when I look at the new task dialog, the worst memories of the Team Explorer go through my mind, and I can’t help but ask:

Gee, that was a lot of harsh critique. I’m looking for someone who can teach me how to criticize in a less aggressive way…

Anyways, here is what I would propose instead: 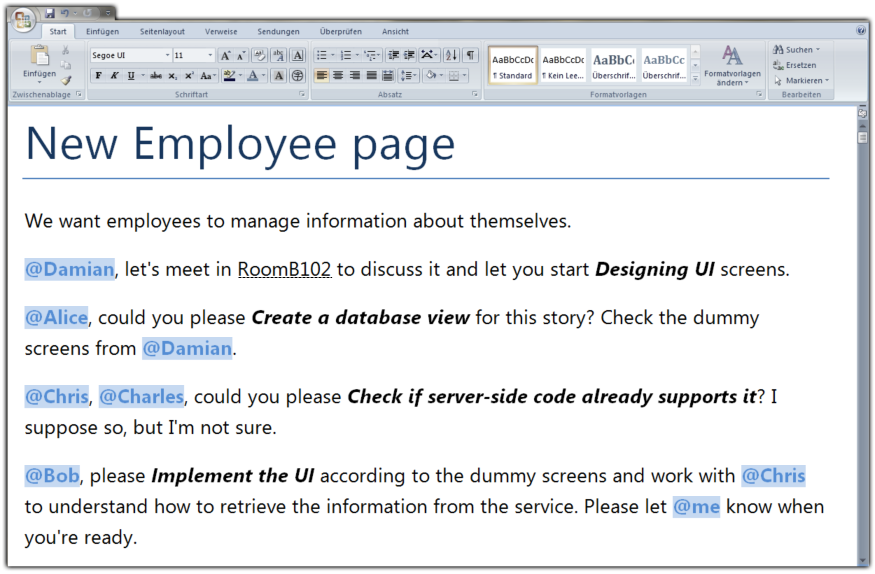 I push a button to create a new sprint item. A window with Microsoft Word like UI opens up.

Generally, I communicate with my team in the same kind I would use if I was writing an E-Mail with tasks. When I hit the Save button, the following happens in the background. TFS parses each sentence. For each sentence containing text with task title style, it creates a task and assigns to it all the persons mentioned in the same sentence. The persons get notification links leading to this sprint item (not to their particular task). The tasks are automatically assigned to the same iteration the containing sprint item is assigned to.

I can right-click on a task title, and an overlay (in the same look as the overlay in Microsoft Word) appears near it, allowing me to enter the remaining work hours for it and change its state. These changes are directly represented in the text, for example by partially coloring the background of the task title, or by striking it through.

One way to reassign a task is by directly replacing the person’s name in the corresponding sentence. When I save the text, a history will be created for that change, and I can optionally enter a comment for it. I also can pass the ball by writing an additional sentence, mentioning the task and another person there. In this case, this additional person will be assigned to the task and will be notified.

If any of words can be recognized as Microsoft Exchange calender resource (eg. Meeting Room, Beamer etc), it will be underlined. If I click on it, Outlook will open with a meeting planning window. Me myself and all persons mentioned in the same sentence will be automatically added to the meeting, and the sprint item and task titles will be put into the subject.

I believe, this UI has several advantages. For the end users, it is plainly more ergonomic and allows for a more humane communication at the workplace. For the decision makers, it looks not less enterprise-ready than the original TFS interface, because it just capitalizes on (and integrates with) existing enterprise-grade tools like Word and Outlook. For Microsoft, it allows to additionally target startups and middle-sized companies still working “in startup mode” because of much less bureaucracy in the UI. And, just in case Microsoft would like to support other big companies allowing them to develop software as huge as Windows using TFS, they can still hide somewhere in the context menu the “Properties” menu item, opening the full property sheet of the corresponding task. But, frankly speaking, I would rather not do even this and allowed to access the full scope of the task object by using a command-line tool like tf.

But that’s another story.