USSR in 1980 was a funny place. By this time, only a minority had really believed in communism, but many “simple” people had nevertheless thought that their life was still better than life standard of the most other nations.

After all, soviet people had a guaranteed job (in fact, everyone has been even REQUIRED to have a job; those who hadn’t could be prosecuted), all kinds of education and health care were free for everyone, it was peace, and by doing some well-known (albeit corrupted) actions you could even be allowed to make a trip into a foreign country and bring back a fashionable jeans and a dream of many soviet boys and girls – a buble gum.

Err… Well, yeah, “they” could make better jeans and bubble gums, but “we” were still better. No only because we didn’t lynched blacks and didn’t have greedy capitalists, but because socialism had future. And capitalism didn’t. Many were adamant of it. I think, my parents supported that too.

It was like an axiom. How come capitalism can have future, when it doesn’t have it on so many levels? And while socialism had a really great future, there were some temporary problems related to the exponential growth — so let’s just be patient and wait and we’ll see how our children will live in communism.

That’s me. Me who ought to be living in communism. 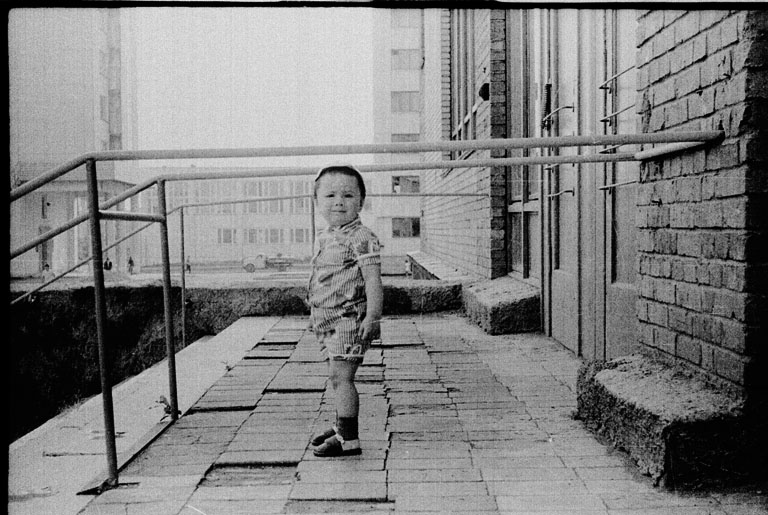 The doors to the right, if you haven’t recognized, are a typical canteen entrance. In this canteen, my parents have celebrated their wedding. I’ve never seen these doors opened, and I’ve never been inside. The canteen was owned by the corporation my parents were working for, and only employees were allowed to enter it. I believe, my parents have also first met each other in this canteen.

The tall white building right behind me is the house where we had an appartment. The corporation had assigned it to my father, because he a) was an employee, b) had a family and c) didn’t have an own place to live. Simple, clear logic, right? I understand he didn’t need to pay for it anything.

The white, light and airy building to the left was a research institute for agriculture. While it is matter of fact that our city’s huge industrial plant of tractors and other agricultural devices had in reality also produced tanks, I don’t really believe this institute was really designing tanks. After all, somebody must also design tractors.

And the flat two-story building in the middle was the so-called palace of culture (PoC) “Monolith”.  PoCs were organized platforms for everybody who wanted to make art — singing, playing different instruments, dance, act in a theatre, paint or even embroider or create ikebanas. It had a relatively large stage, which could be used for amateur theater plays or concerts. In 1987, Tsoi planned to give a concert there, which was unfortunately prohibited. Later, I took some lessons of piano and acting. Not that I was particularily talented, it was just completely free for children — so why not?…

The purpose of the strange pipes above my head is still puzzling me. For a simple banister, their design is too complicated. For an arty banister, its too ugly and crude. I thought it could be something for children to play, and had actually tried to play with it on the day when this photo had been made. But quickly (and painfully) learned it wasn’t suitable for children either… 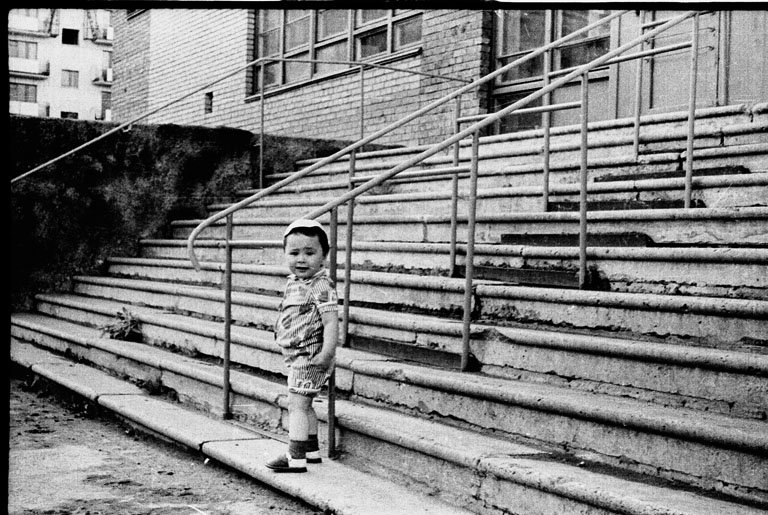 Oh yeah, these were the days when nobody ever thought about making things child proof. And nevertheless, we the children were happy.

We were told we’re living in the best, most progressive country in the world. Our army was more powerful than any other army except of the USA, where we’re equal. Thus our peace was sure. The way we live was scientifically proven. Communism, the heaven on earth, was not only possible, but already calculated and included into the development plans. And we were the one, the happiest generation on this planet, who will be able to shape it. Conceiving, designing and developing the heaven — what other task can be more challenging but also revarding for a geek by nature, a son of two engineers? 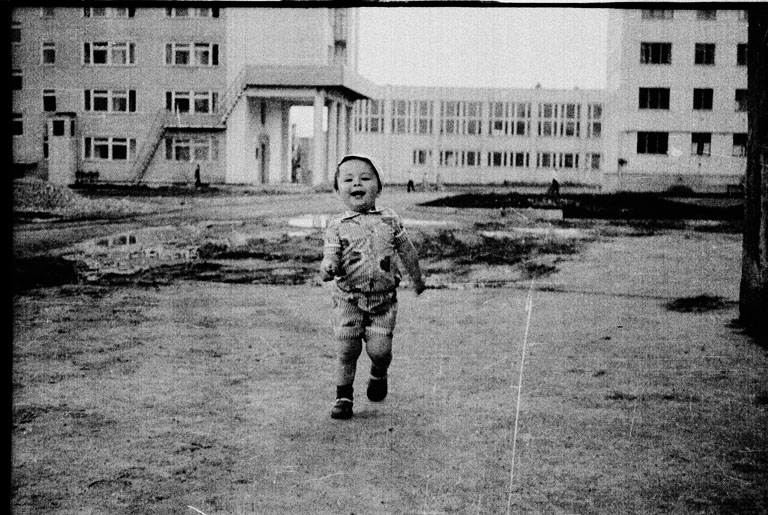 I often think, what if I met him, fearless, happily running to his mother, and firmly knowing how wonderful and beatiful his life will be. What if I could talk to him. What would I say?.. Would he believe me? Would he give me his hand? Or rather run away, terrified and believing I’m a stranger going to rob the most precious he has — his dreams…

And robbed he was, albeit slowly, but still robbed and abused. First, food will become scarce, then his money will turn into pieces of paper, then his propertly will be stolen, and his country will fall apart. Somewhere, staying in the line at 5am, before the closed food store, with a number written on his hand telling he is the 153rd to buy 20 eggs, and holding his 3-years old sister in his arms (because without the sister he would only get 10 eggs), he will lose his dreams.

But this will happen later. And this is completely another story.

Now, in this very moment, he is utterly happy in his hippy clothes. 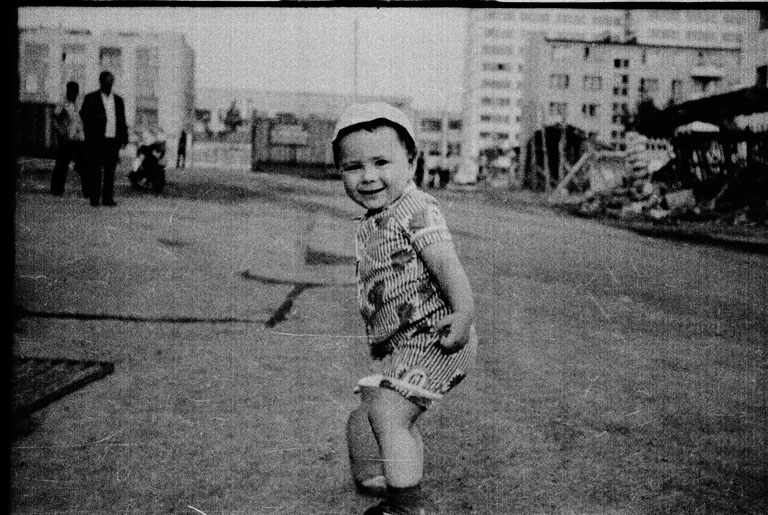 And I want to be with him. I want to have future too.